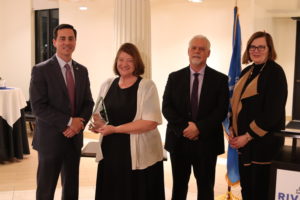 As the recipient of this award, Ms. Henderson was recognized for her hard work and devotion to Riverton City.

This is what the Mayor’s Service Award said about Ms. Henderson:

Pam Henderson is most deserving of the inaugural Mayor’s Service Award. Pam is the current volunteer advisor for the Riverton Youth Council, a member of the Riverton City Events and Inclusion Committee, and a prime example of a resident who strives to make our community better.  She is extremely supportive of all Riverton City events and initiatives and frequently gives of her own time to volunteer and serve in a variety of capacities, often without recognition.  Her selfless service and can-do work ethic exemplify the very best of our community.