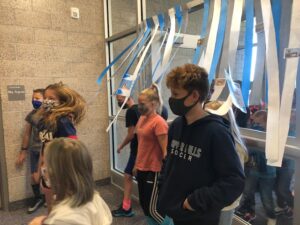 Students at the new Antelope Canyon Elementary School in West Jordan thought they were being asked to go outside to participate in a fire drill, but the principal and assistant principal had a secret surprise planned. As soon as everyone was out of the building, they quickly went to work covering every entrance into the building with streamers representing the school’s new colors and pictures of the school’s new mascot, the Pronghorn. When students and staff came back into the building there were shouts of joy as they realized BLUE, GRAY AND WHITE are the official colors of the Antelope Canyon Pronghorns.

Students selected several different color options and then the entire school voted on them. The winning colors appeared to be a big hit as students cheered and applauded when the schoolwide announcement was made to introduce the official colors.

We are excited to see the Antelope Canyon Pronghorns make lasting memories in their amazing new school.