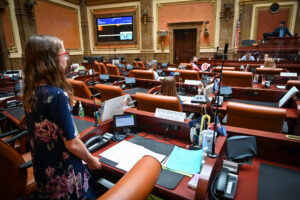 Some students from Bastian, Silver Crest and Herriman Elementary Schools received a hands-on lesson on how bills are passed and how the state legislature works. They headed to the State Capitol for a field trip where local lawmakers welcomed the students and taught them what is being described as “Government at a Glance.” Students had an opportunity to ask questions and tour the Capitol. Then, they headed to the floor of the House of Representatives where they debated eight bills in a mock legislative session. For example, they debated a mock resolution to make ice cream the official dessert of Utah.