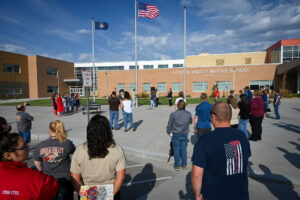 They were not yet born on 9/11 20-years ago, but on Friday, Hidden Valley Middle School students gathered with local first responders, city officials and members of the community for a “Sunrise Salute to Patriot’s Day.” Principal Shawn McLeod says as we commemorate the 20-year anniversary of 9/11, it’s important for students to remember, honor, and pay their respects to all families who were impacted by the attacks two decades ago. It is also an opportunity to show support for all first responders and men and women of the military.

The Sunrise Salute included musical performances by the school choir and a patriotic sing-along with those in attendance.