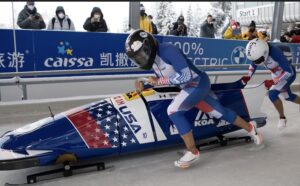 She was a star athlete at Herriman High School with 16 state titles in track and field. Kaysha Love was also named the Gatorade Athlete of the Year her senior year at Herriman High. Now, her drive, tenacity, work ethic and natural ability has Kaysha heading to Beijing to compete for a gold medal in bobsled at the 2022 Winter Olympics.

As a result of her fierce, competitive nature, Kaysha was invited to try out for the U.S. Bobsled Team and she ultimately claimed the title of 2022 World Cup Champion along with her driver Elana Meyers. This month Kaysha was officially named to the US Olympic Bobsled team as a brakeman. She will be competing for gold at the Winter Olympics on February 18 and 19.

We are extremely proud of this Herriman High School graduate. Congratulations, Kaysha, on your amazing accomplishments! We will be cheering you on as you go for gold in Beijing.