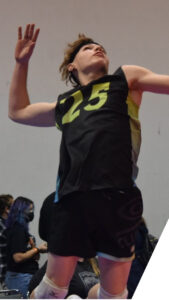 He can bump, set and spike with the best of them and now an Oquirrh Hills Middle School 8th grade student is making a name for himself in competitive volleyball. Gideon Catmull just helped his team win the silver bracket Championship at a National volleyball tournament in Anaheim, California. That’s after playing with the team for just three months.

As a result of the recent win in California, Gideon and his team members will now compete at the USA National Championship in July.

Way to go Gideon! We are cheering you on for another big win.