Who: The students of Jordan School District deserve the highest quality education. Attracting and retaining outstanding teachers is essential to providing the best education possible.

What: The Jordan School District Board of Education is seeking your input on a proposed tax increase of about $20 per $100,000 of home value per year for the sole purpose of increasing pay for teachers. The increase would fund a starting salary of $48,000 and an increase in pay of just over $6,000 for all teachers.

When and Where: Open houses are being held to provide an opportunity for the public to interact with the Board before the formal Truth-in-Taxation hearing. At the hearing, the Board of Education will hear all public comments, then vote on a potential increase in property taxes. Dates, times and locations are as follows:

Why: The greatest positive impact on student learning comes from having highly effective teachers in the classroom. An increase in the tax rate is being considered in order to fund a pay scale that will attract and retain strong teachers at all levels.

Q. When was the last time the Jordan School District Board of Education raised taxes?
A. The Board has not raised taxes since August 2009.  Jordan is among only seven districts out of 41 that have waited this long to raise taxes.

Q. Why does the tax rate have to be raised to generate more money? Doesn’t the amount of taxes collected increase over time as property values increase?
A. The property tax system in the state of Utah operates on a principle generally called “revenue neutrality.”  The tax rate “floats” up and down as property values across the District increase or decrease. As a result, the District collects the same amount of money as the prior year. Tax revenues only increase through construction of new homes and businesses or through a tax increase.

Q. How do taxes paid and inflation compare since the last Truth-In-Taxation hearing in 2009?
A. Homeowners paid a lower average tax amount than they would have paid if the tax rate had been adjusted for inflation each year.

Tax Base Compared to Inflation

Per Pupil Spending by State

Per Pupil Spending by District

Q. Who would be affected by the tax increase?
A. Property owners within Jordan School District boundaries would be impacted. This includes residents and businesses in Bluffdale, Copperton, Herriman, Riverton, South Jordan, and West Jordan, as well as some other small areas of bordering cities and some unincorporated parts of Salt Lake County.

Q. Why does pay for teachers need to be increased?
A. Teachers have the greatest impact on student learning. Jordan School District and the State of Utah have experienced a teacher shortage for years. Competitive pay is necessary to attract and retain excellent teachers to replace retiring teachers and provide instruction to an ever-larger student population. Because Jordan is a growing district (projected enrollment increase of 2,532 students, or 4.6% next year), we have a need to hire hundreds of additional teachers each year. 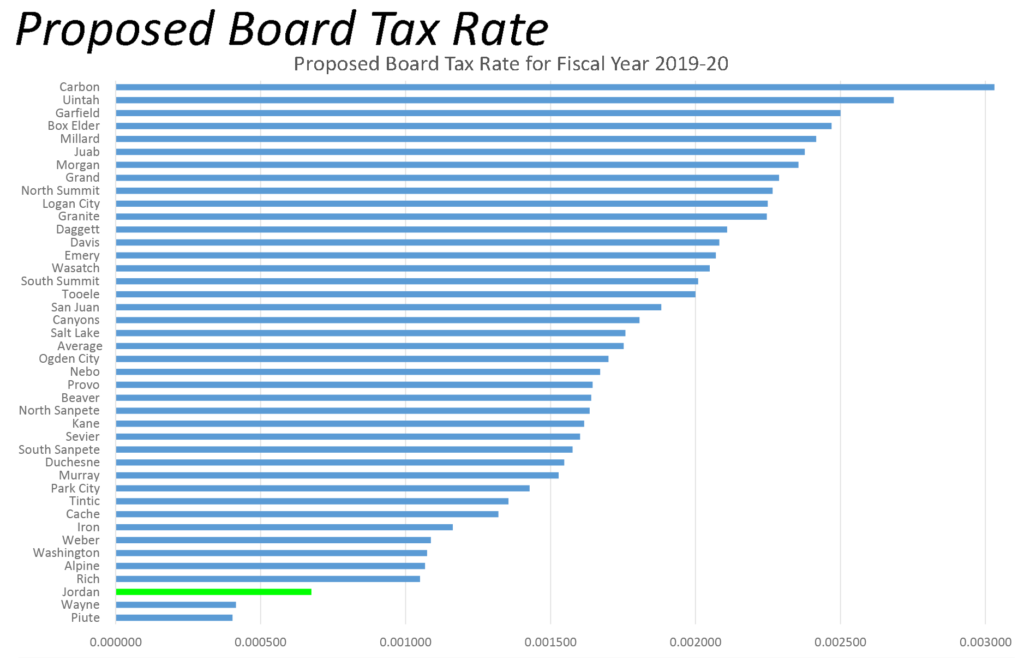 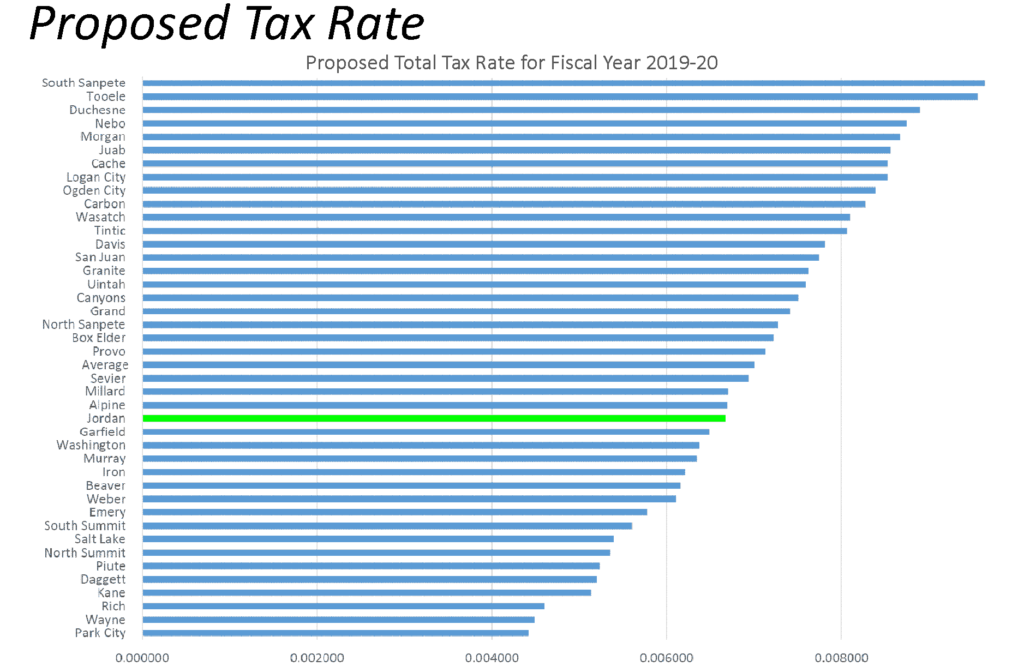 Q. Will Jordan lose state funding if taxes are not increased?
A. Yes. The state has a program that allows districts with a lower assessed valuation (like Jordan) to receive additional state funds. These funds are only available to districts that assess a minimum tax rate. If Jordan’s tax rate is not increased, we will lose about $900,000 in state funding in the first year. This amount would increase over time.