The Jordan School District Board of Education held Truth in Taxation hearing on Tuesday, August 2 at 6 p.m. at Riverton High School to consider increasing taxes. This was an opportunity for public comment on the tax increase.

Jordan works hard to use resources efficiently and to provide a world-class education for students and a supportive work environment for all employees.

Did You Know We Do More with Less?
Did you know Jordan School District’s tax rate is less than other school districts in our area?
Jordan’s tax rate is near the State average and below other neighboring districts. 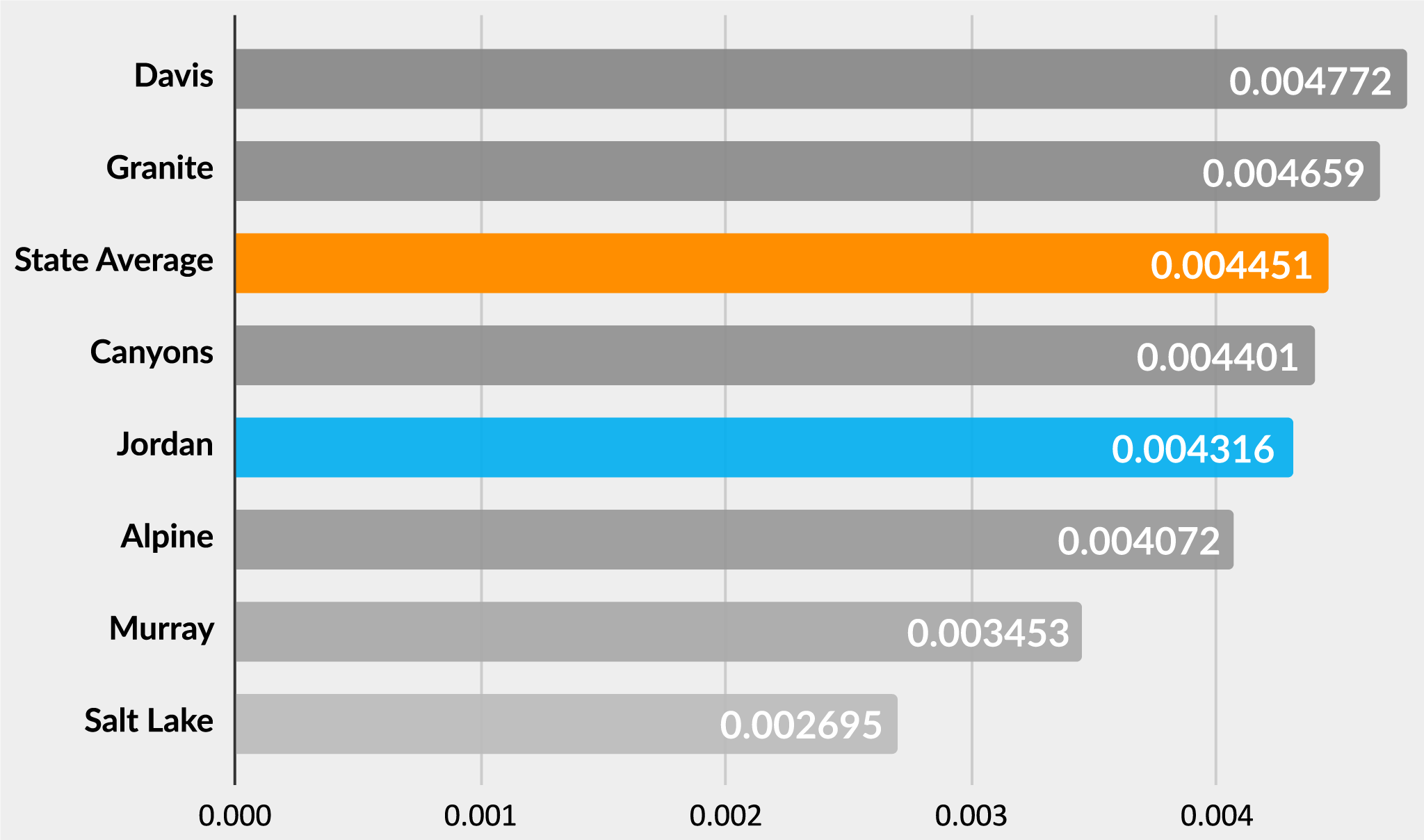 Jordan’s assessed valuation per student is $442,815. That is about half of the state average.

Jordan School District’s total tax yield per student is $1,996 which is well below the State average. 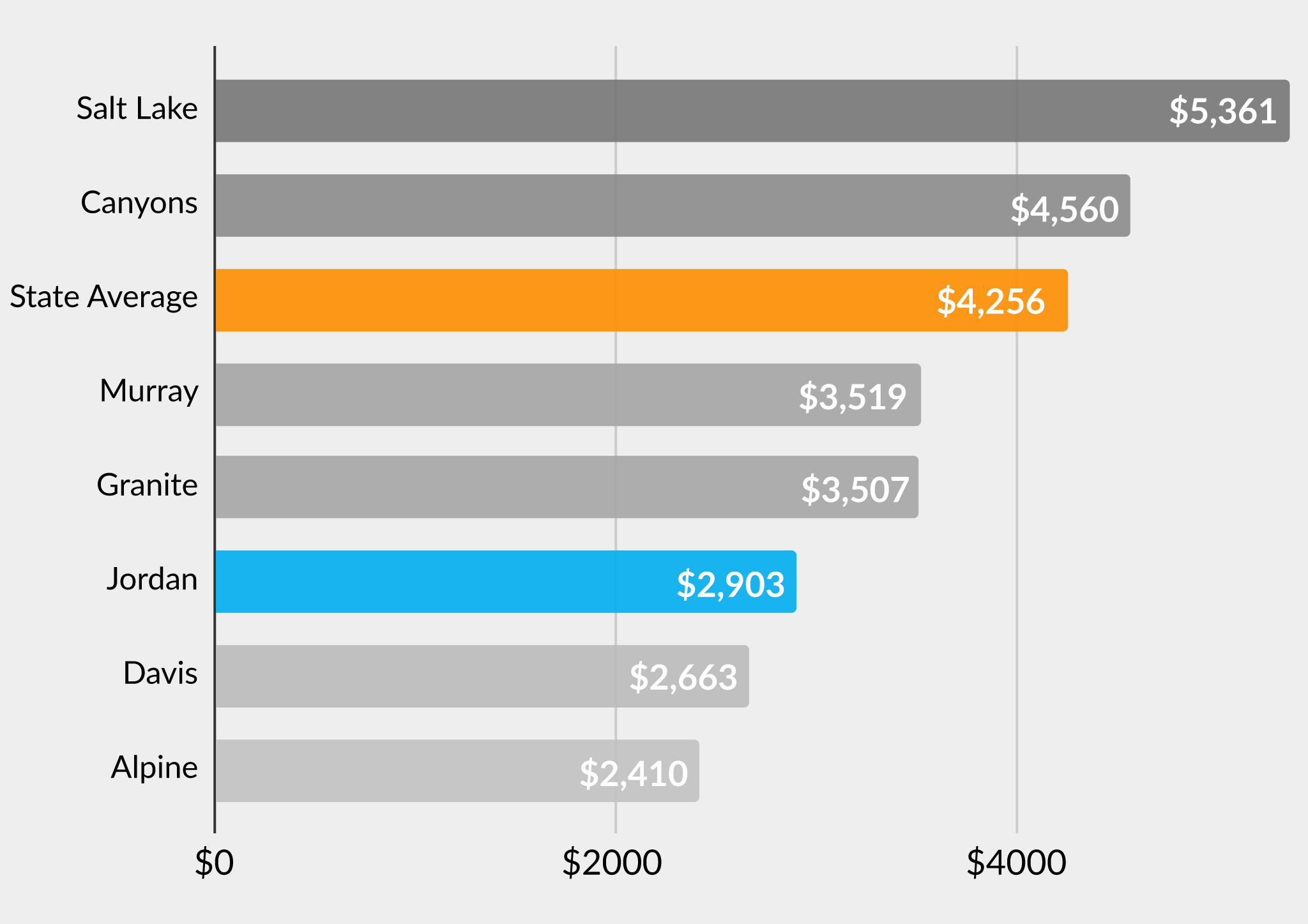 Extra Funding from the State
Did you know the State gives extra funding to Districts like Jordan which have a smaller tax base per student?
This is money that comes from State equalization programs. The programs exist to ensure students have some minimal funding equity across school districts.

The State gives extra funding to district’s like Jordan. But even with the additional State funding we receive, Jordan is nearly lowest in the entire state in per student operations funding, just three districts are lower. District Growth
Did you know Jordan School District is one of the fastest growing school districts in the State?
Projections show that Jordan anticipates an increase of 3,631 students in the next seven years. To house all those students, we’d need the equivalent of four elementary schools or 145 portables. 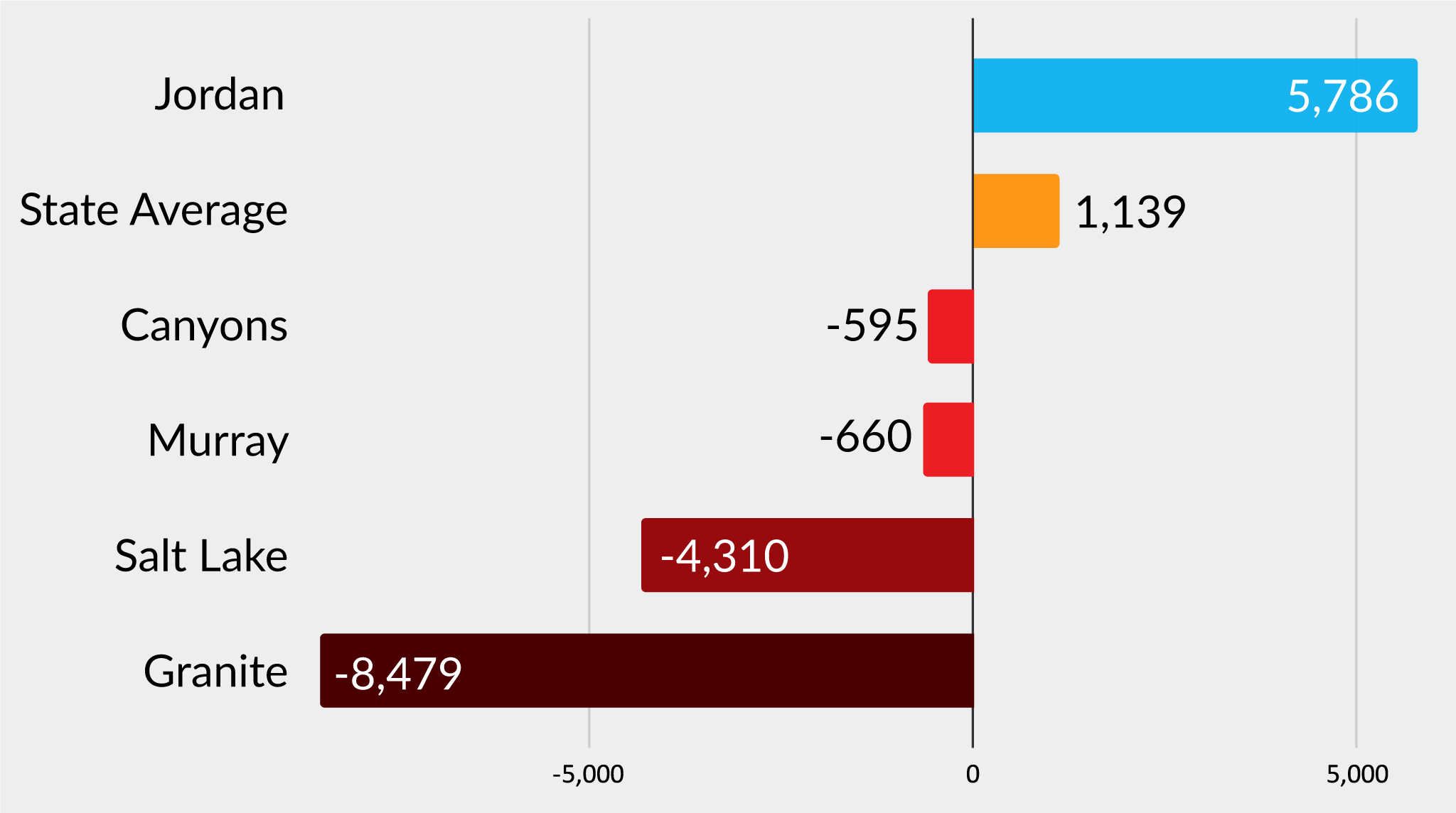 Your Investment in Students and Education, Teacher Pay
Do you know why Jordan School District relies on you to invest in our students and their education?
Jordan School District has worked hard to provide teachers and school staff the pay increases they so deserve. The Board of Education has consistently increased teacher pay and right now the starting pay for teachers in Jordan is competitive with surrounding districts.

As a result of consistently increasing teacher pay, along with other employee salaries like custodians and bus drivers, our strategic reserves have been declining. They have now dropped to a point where we need help from taxpayers to continue our investment in employees. 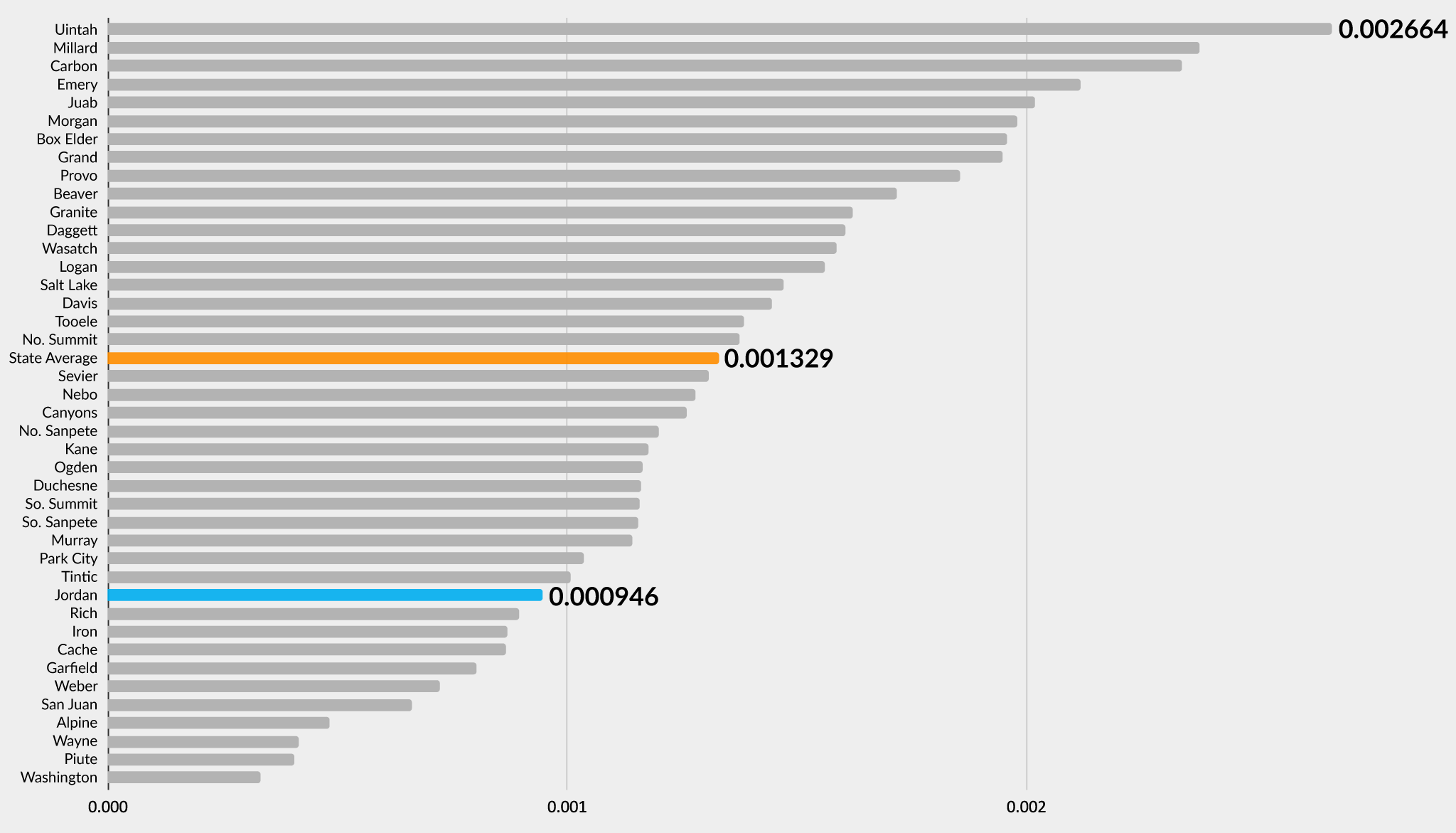 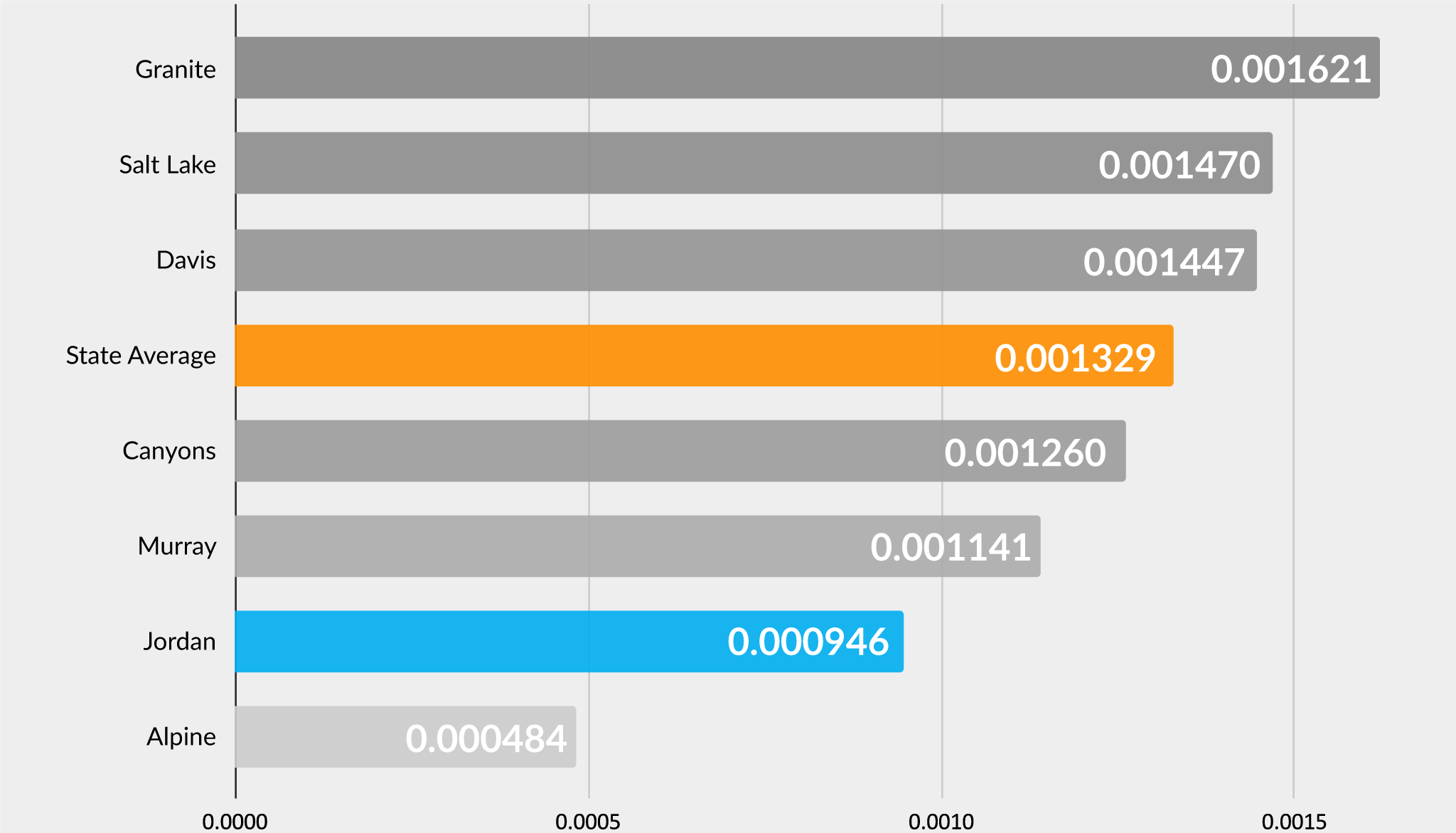 Certified Tax Rates & Truth in Taxation
Do you know how Utah’s property tax system works?
In Utah, property tax rates adjust each year so the taxing entity will receive the same total tax proceeds it received in the prior year, except for any new property developments. This means that as property values increase, the property tax rate decreases so the resulting tax revenue is the same as the prior year. Only new developments that were not on the tax rolls in the prior year yield new property tax dollars for a taxing entity. No adjustments are made for inflation. The county auditor and the State Tax Commission calculate this tax rate and it is called the Certified Tax Rate. Governing bodies, such as the Board of Education, may increase the tax rate from the Certified Tax Rate only if they go through a process called Truth in Taxation. Truth in Taxation requires the entity to hold a public hearing to provide an opportunity for residents to comment on the proposal before an increase may occur.

The Jordan School District Board of Education is holding a Truth in Taxation hearing on Aug. 2 at 6 p.m. at Riverton High School.

Jordan is one of a handful of districts in the State that has had just one Truth in Taxation since 2011. 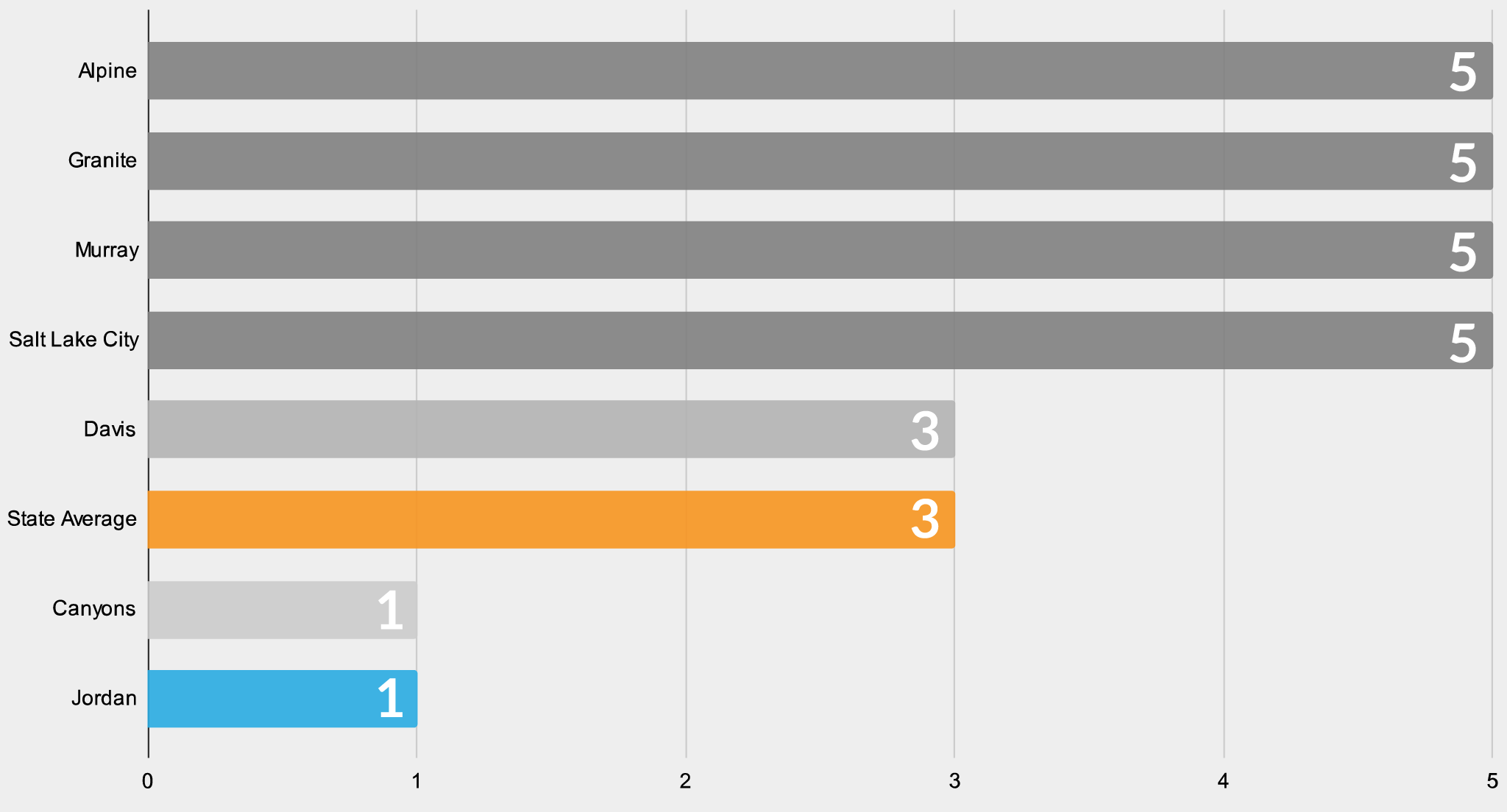